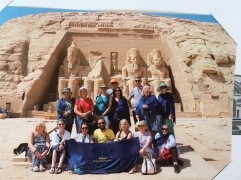 We drove south to  Abu Simbel, an 8 hour drive and the southernmost point of our trip. This is 300km through the NubianDesert. A beautiful morning as we caught our ferry to the mainland to catch the bus.

The desert was a barren featureless landscape, unlike Australia where there is almost always spinifex or some vegetation, it had nothing growing at all. There was an occasional villages and green oasis, but generally without trees or grass, nothing until we came to a mysterious wall being built by labourers, for miles it extended in the  middle of nowhere. It’s apparently a project to direct water via canal to make the desert provide food security for Egypt.

We arrived at the massive dam which flooded the Temples of Ramses II and Nefertari his wife, called the Temple of Hathor. They removed the temples at a cost of US $140 million, to a higher site with placement so the sun still enters illuminating the figures of the Gods at solstice. However the energy was not as high as yesterday and I suspect it’s because it’s been moved. There was a cool breeze from the dam, the largest in the world, which cooled things down a bit. It is said to be the Temple of Divine Mind. Built in 1274 to 1244 BC.

There was already a temple on the site to local gods Horus of Mena and Hathor of Ibshek, when Ramses appropriated it, so he incorporated images of them.

Franz Christian Gau, the skilled Cologne architect, the first European to reach Abu Simbel, drew and published 4 figures, one of which is blue as Min had described to us, some of our extraterrestrial ancestors were. Subsequently an expedition in 1829 by Champollion and Rossellini published in 1832, also showed a blue god.

Drunvelo Melchizedek has this ti say about Abu Simbel:

The mural seen in figure 10-6 is on a wall at Abu Simbel, and you see the family here—Isis, Horus and Osiris. This is the only place I’ve seen in all of Egypt where they actually show the physical use of these tools of resurrection. I couldn’t believe it when I saw it. Horus is holding the rod to the back of Osiris’s head, right at the chakra point that is the primary doorway into the eighth chakra. The hook is not shown here, but they actually slide the hook up and down this main rod to tune it. Evidently they got it tuned just right without it. Here Osiris is holding his arm up and one finger is holding the tuning fork, which is an angled piece with which you can fine-tune your body to get the exact vibration running up your spine.

In the evening we had a buffet in  Hotel Novenpick, which was much more suited to our tastes. The next morning, I swam and did a toning in the beautiful infinity pool beside the Nile, doing some very deep earth tones.

We then moved onto the Sonestra St George for our  Nile cruise.