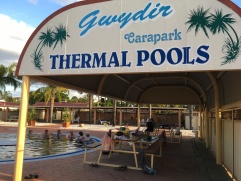 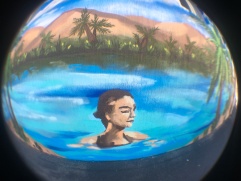 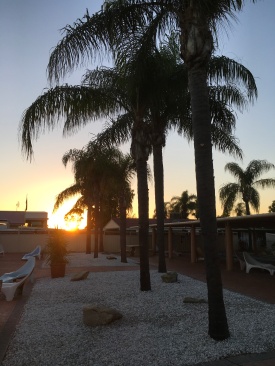 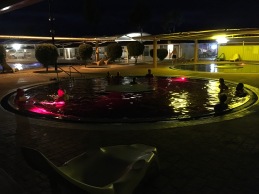 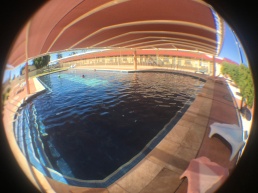 Drove out to Moree to meet another light worker Anne from Merimbula. Stayed outside Glen Innes overnight, it was cold, so had to put more blankets on. In the morning I could hear the hum of an energy line, or leyline. It was also good Wi-Fi area

Arrived for lunch in Moree and spent the afternoon in the cool pool, gradually working up to 34 and then 35 degrees centigrade, working up to 37 and 39 degrees over the next few days. On the Tuesday I had a Harmonic Chimes Attunement from Helen Palombo at The Well-being Room, next to the kiosk in the Gwydir Carapark.

On the Wednesday I felt a little dizzy in the afternoon, and so did Anne. As we were to do a meditation that night, I felt it was energy coming in for the “Healing of the Waters”, but as a precaution we decided to do the meditation in the cooler 34 degrees pool. We were not disturbed by people around us. I decided to link in with the Planetary Healing, being done everywhere at 7 pm. I used the meditation in “Great Artesian Basin 2”, and played Murray Kyle’s Protect the Waters also on that blog. The meditation brings in Archangel Raphael’s Emerald green light for healing. It was very peaceful in the water holding hands and we found our legs drifting up to the surface as the green light washed over us.

I focussed on the water falling in the tropics, recharging the Great Artesian Basin, as the water makes its way through the aquifers down to NSW from QLD.

I also requested funds be made available for finishing the recapping of the bores, so that water in equals water out, so this great natural resource is available for healing the inland and its inhabitants.

We left the next morning and I stopped on the banks of the Gwydir River where a huge flock of white cockatoos and galahs were feeding on the ground.

Also as I write this it’s raining on Mount Tamborine and I feel it’s recharging our underground water, which has been recently over exploited. It’s the drying up of wells that’s a sign that things are not in balance or equilibrium. That’s been happening on a grand scale and has to stop. As the song says:

“For our grandsons and grand daughters, may they drink from pure water.”